A fun geometry problem to think about is: given two polygons, do they intersect? That is, do they touch on the border or overlap? Does one reside entirely within the other? While this question has obvious applications in computer graphics (see: arcade games of the 1980s), it's also important in areas such as cutting & packing problems.

There are a number of way to answer this. In computer graphics, the problem is often approached using a clipping algorithm. This post examines a couple of simpler techniques using linear inequalities and properties of convexity. To simplify the presentation, we assume we're only interested in convex polygons in two dimensions. We also assume that rotation is not an issue. That is, if one of the polygons is rotated, we can simply re-test to see if they overlap. 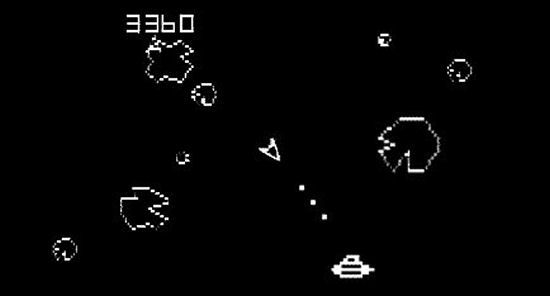 Don't get clobbered by an asteroid!

Polygons that do not intersect

However, if they are too close in some manner, the objects will either touch or overlap, as shown below.

The two polygons can intersect in a few different ways. They may touch on their borders, in which case they will share a single point or line segment. They may overlap such that their intersecting region has nonzero relative interior but each polygon contains points outside the other. Or one of them might live entirely within the other, so that the former is a subset of the latter. Our goal is to determine if any of these cases are true given any $\left(x_t, y_t\right)$, $\left(x_s, y_s\right)$, and $a$.

The first method we use to detect intersection is based on the fact that our polygons themselves are the intersections of finite numbers of linear inequalities. Instead of defining them based on their vertices, we can equivalently represent them as the set of $\left(x, y\right)$ that satisfy a known inequality for each edge.

Similarly, let $S_s$ be the set of points in our square. This set is defined using four inequalities, which are shown in a slightly compacted form.

Finally, let $S_i = S_t \cap S_s$ be the set of points that satisfy all seven inequalities.

Method 2. Use Convex Combinations of the Polygon Vertices

We can define the set $S_t$ equivalently using this concept.

Similarly, the square is defined a the convex combination of its vertices.

If there exists a point inside both the triangle and the square, then it must satisfy both convex combinations. Thus we can define our intersecting set $S_i$ as follows. (This is a little loose with the notation, but I think it makes the point a bit better.)

Just as before, if $S_i \ne \emptyset$, our polygons intersect.

These aren't necessarily the best ways to solve this particular problem, but they are quick and flexible. And they leverage existing solver technology. One downside is that they aren't easy to adapt to certain decision making contexts. That is, we can use them to determine whether objects overlap, but not to force objects not to overlap. In the next post, we'll go over another tool from computational geometry that allows us to embed decisions about the relative locations of objects in our models.